Welcome to Structure Corner, a series of Spotlights where we use StructureFlow to help explain the complexity behind current and engaging commercial issues, harnessing the power of visualisation to do so. In this Spotlight, we’re taking a look at the UK’s gas supply squeeze, delving into the detail behind this prominent news story.

The price of natural gas across Europe and the UK is soaring. Over the course of 2021, prices have risen by an eye-watering 280% and by 70% since the start of August.

As a result, consumer energy bills have suffered big increases, with many smaller energy suppliers forced out of business and industrial production being affected as well. Prices of many consumer goods have increased due to increased costs through the supply chain, and some factories have been forced to temporarily shut down.

What are the contributing factors?

A number of factors have contributed to the current high prices, as shown in the diagram below. 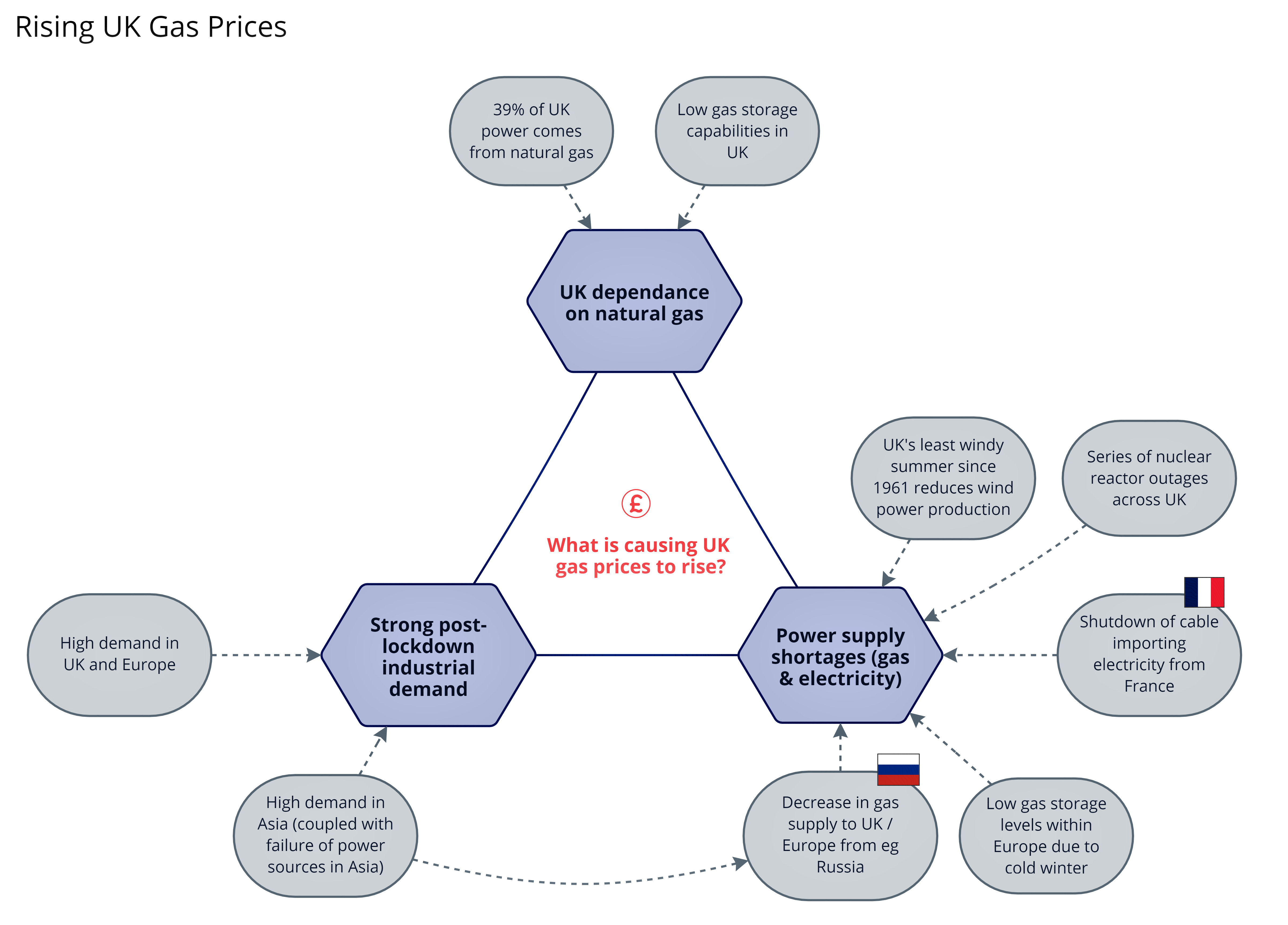 Europe is also having to compete with high demand from Asia, which is having energy production issues of its own – such as droughts in China in 2020 that led to lower hydropower generation.

Russia supplies about 50% of the EU’s natural gas imports, but despite demand clearly increasing recently, supply levels from Russia remain well below pre-pandemic supply levels. Russia is encouraging Europe to give the go-ahead for Nord Stream 2, a new pipeline transporting gas directly from Russia to Germany, but due to political controversy there are delays to its opening.

What is the impact on UK consumers?

Ofgem (the Office of Gas and Electricity Markets) imposes an energy price cap, limiting the amount companies can charge customers on particular tariffs or prepayment meters for gas and electricity. This cap has been raised from £1,138 to £1,277, increasing energy costs for 15m UK consumers.

This increase has not been enough for many of the UK’s smaller energy suppliers. Twelve suppliers have collapsed, being unable to source energy at a price that will enable them to supply it to consumers within the price cap. Nearly 2m customers of these suppliers have needed to be transferred by Ofgem over to other suppliers, as shown below. 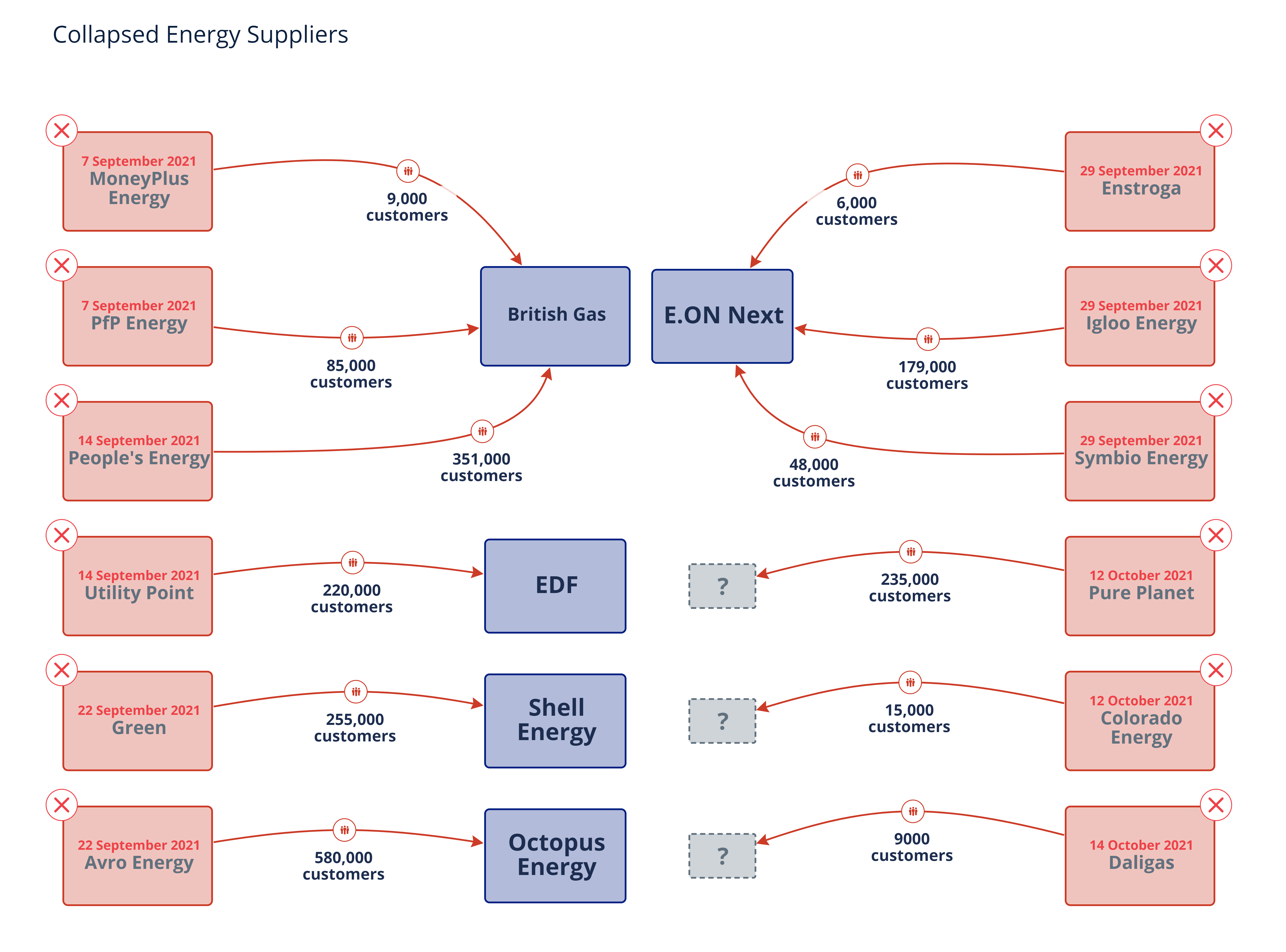 Analysts have projected further rises in energy prices, and a further increase to the energy price cap, in 2022. In addition, as businesses pass on higher energy costs, consumers could continue to be hit by further price rises for other goods.

A major reason for the collapse of smaller energy suppliers relates to their inability to sufficiently hedge against price volatility. Hedging enables energy suppliers to purchase natural gas and electricity in advance at a fixed price, giving some protection against prices rising in future periods.

Larger energy suppliers are able to hedge prices in this way to a far greater extent than smaller ones, leaving the smaller suppliers with a greater exposure to price increases. 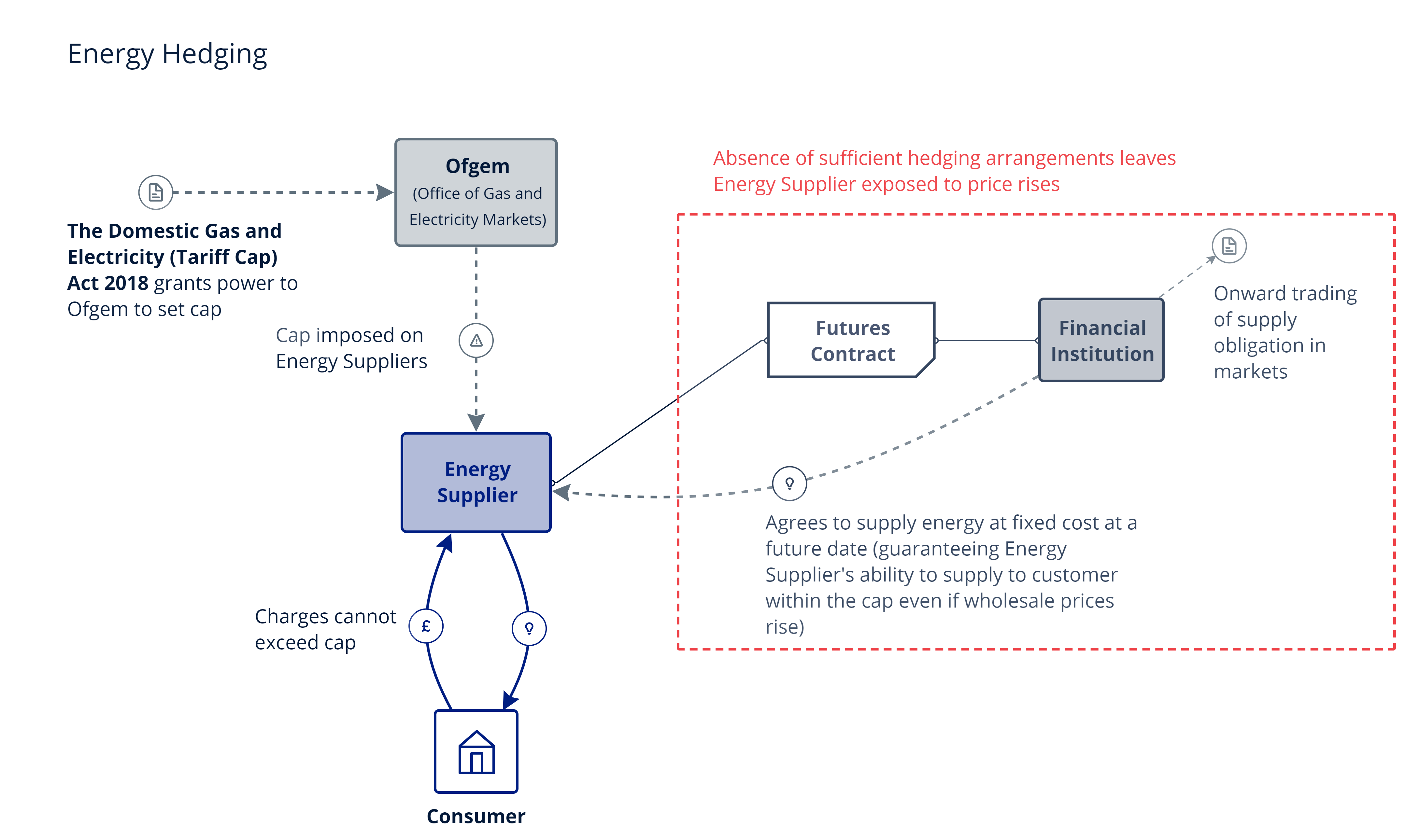 As Ecotricity, an independent UK energy supplier, explained in a statement on 21 September to assure their own customers: “It’s important to know that [the collapsed companies] did not hedge their electricity and gas supplies, meaning they did not secure them in advance… Ecotricity has hedged its electricity and gas supplies. We have 90% of our requirement bought in advance for 12 months. The other 10% is not available until closer to the point of delivery. We are thus protected to the maximum possible… and our trading team are keeping a close eye on the situation.”

What is the outlook?

With gas storage levels in Europe and the UK dropping by 13% from the yearly average, there is a continued risk of further price increases. Whilst Consumers have at least been assured that there is no risk to supplies actually running out this winter, there could be more economic pain in store. The current crisis is also likely to trigger serious enquiries into the UK’s energy storage capabilities and could quicken the UK’s pivot away from natural gas. The full impact remains to be seen.

Get access to the Gas Crisis project in StructureFlow

To view our UK Gas Supply Squeeze diagrams within the StructureFlow application and find out how you can harness the power of visualisation, please submit your details in the form below for access. Finally, keep an eye out on LinkedIn for our next Spotlight!