Welcome to Structure Corner, a series of Spotlights where we use StructureFlow to help explain the complexity behind current and engaging commercial issues, harnessing the power of visualisation to do so.  In this Spotlight, we’re taking a look at football takeovers past and present, following the recent high-profile takeover of English Premier League club Newcastle United.

Modern-day football club takeovers provoke intense public fascination. With player transfer fees and salaries sky-high, huge amounts of investment are needed to compete in the Premier League, and takeovers can only be contemplated by the world’s richest individuals and organisations. As a result, we see enigmatic and often controversial protagonists from around the globe seeking to progress multi-million-pound deals, against the backdrop of the expectations, passion, and community of the club’s local fan base.

Newcastle and the Saudi Prince

It is currently the turn of Newcastle United fans to celebrate a change of ownership.  Following a deeply unpopular 14-year tenure during which the club was twice relegated from the Premier League, former owner Mike Ashley accepted £305m to sell the club in October 2021. 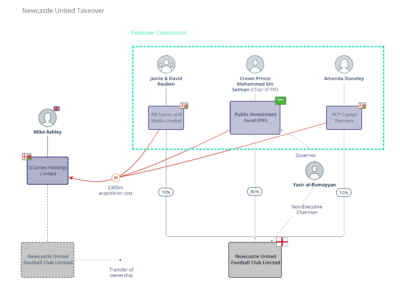 With overall assets reported to be in the region of $250bn, PIF has the funds needed to make Newcastle fans happy. However, the close ties to Saudi Arabia combined with Saudi Arabia’s record on human rights, have led to allegations of “sportswashing” from critics. This term has come into usage to call out efforts by a state to use sponsorship or investment in sport to distract attention from a poor record or reputation and improve its public image.

As part of the takeover agreement the Premier League obtained “legal binding assurances that the Kingdom of Saudi Arabia will not control Newcastle United Football Club”, but controversy surrounding PIF led to long delays to the completion of the takeover. Meanwhile, Amnesty International heavily criticised the Premier League’s Owners and Directors Test for not referencing morality clauses among its requirements.

The Newcastle takeover bears strong similarities to the takeover of Manchester City in 2008.  City were bought for £200m by the Abu Dhabi United Group, a United Arab Emirates sovereign wealth fund owned by Sheikh Mansour – deputy prime minister of the UAE and a member of the royal family.

The ownership of the club has raised similar claims of “sportswashing” from human rights organisations, but this has not stopped the group from acquiring further sporting interests globally. Alongside US and Chinese venture capital investors, the group now owns interests in 10 football clubs worldwide, from US outfit New York City FC to Japanese club Yokohama F Marinos.

This model may provide a blueprint for Saudi Arabia’s PIF to create its own global sporting behemoth, with Newcastle United at the cornerstone. 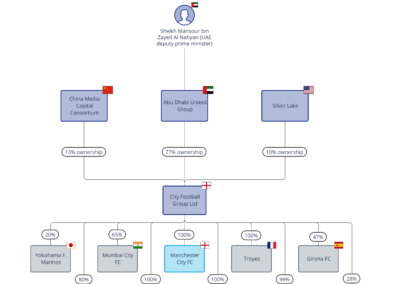 ‘Love United, Hate Glazers’ – this phrase might sound all too familiar to Manchester United fans, who have protested against the ownership of the Glazer family since their takeover of the club in 2005.

The Glazer family had experienced previous sporting success with NFL team the Tampa Bay Buccaneers, but required huge amounts of debt finance to fund the £790m buyout of Manchester United. This approach, and the subsequent burden of a heavy repayment schedule secured against the club’s own assets, triggered backlash and anger amongst the club’s fans. It is estimated that finance costs including interest payments have since cost Manchester United in excess of £1bn, and the club remains in £450m of debt.

The PIK notes element of the financing was particularly burdensome – with the initial interest set at 14.25% per annum, and with none of these loans paid down for five years, huge interest payments accrued. Subsequent refinancings were required in 2010 and 2012, involving a £500 million bond issue and the listing of a proportion of the Glazers’ shares on the New York Stock Exchange. 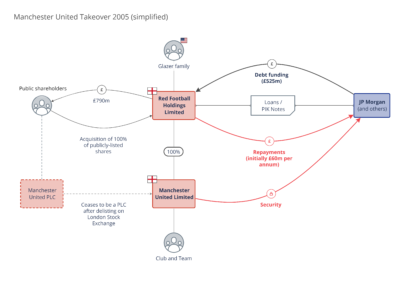 With the Newcastle takeover now complete, it could be a while before we see another Premier League takeover, but two Championship clubs – Derby County and Hull City – are reported to have potential buyout deals on the table. No football takeover is the same – but what’s for sure is that we have not seen the last of high-profile new owners, foreign or domestic, promising to drive success for their eager new fanbase.

For more on takeovers, head over to our recent post discussing the Morrisons Takeover.

Get access to the Football Takeovers project in StructureFlow

To view our Football Takeovers within the StructureFlow application and find out how you can harness the power of visualisation, please submit your details in the form below for access. Finally, keep an eye out on LinkedIn for our next Spotlight!